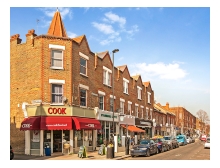 Clapham is part of the London Borough of Lambeth and falls mainly within the SW4 postcode. Clapham High Street and Clapham Common South Side run down the spine of SW4 and this main road is home to Clapham’s three Northern Line underground stations.

Clapham is probably best known for the green expanse of Clapham Common which contains three ponds and paddling pool known as Cock Pond. The transport links throughout Clapham are excellent and with the vibrant nightlife, it has become the social hub of South West London.

Clapham is renowned for its highly cosmopolitan population and it is home to many affluent residents which include Piers Morgan, Vivienne Westwood and JK Rowling.

What Wikipedia has to say about Clapham

“By the 1980s Clapham had undergone considerable transformation becoming the epicentre for the gentrification of most of the surrounding area. Clapham's proximity to the traditionally upper class areas of Sloane Square and Belgravia which became increasingly unaffordable to all but the very wealthy in the boom years of the 1980s and 1990s led to a colonisation of the area by the middle classes, but in recent years the demography has widened considerably. Clapham is now a highly sought after and attractive cosmopolitan area attracting people from all around the world. It is increasingly sophisticated and urbane in outlook and is regarded as one of London's trendiest and most desirable neighbourhoods south of the river. However, Clapham still retains a bit of its old 'edginess' and is somewhat of a multi-cultural melting pot and home to a considerably large gay community. Clapham has a vibrant community spirit with many professional single people and married couples choosing to live there. Many young university graduates also chose to live in the Clapham area, a tradition carried over from the days when some University of London halls of residence were located in the area."

View all properties for sale

View all properties to let

"After having to walk away from the property the night before, Tufael made the effort to call me first thing and offer the new price. He was very informative about the process and kept me updated over the hours following the offer until it was accepted. I am very grateful for his help."